Paintings from the Solo Show at Museum 52 London, 2007 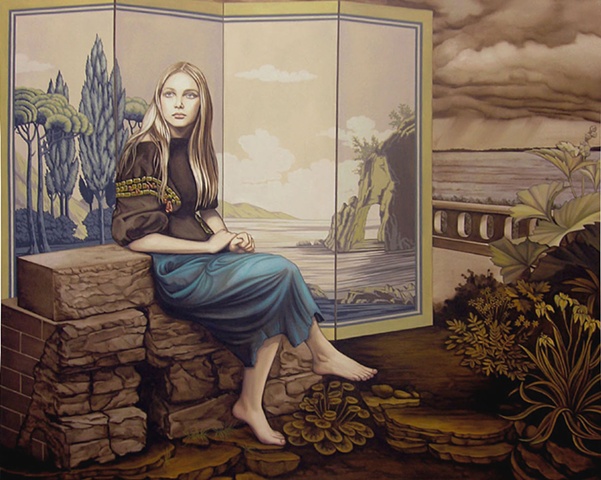 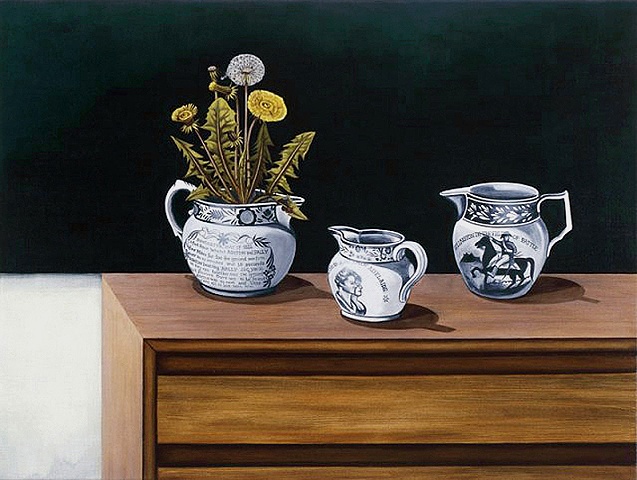 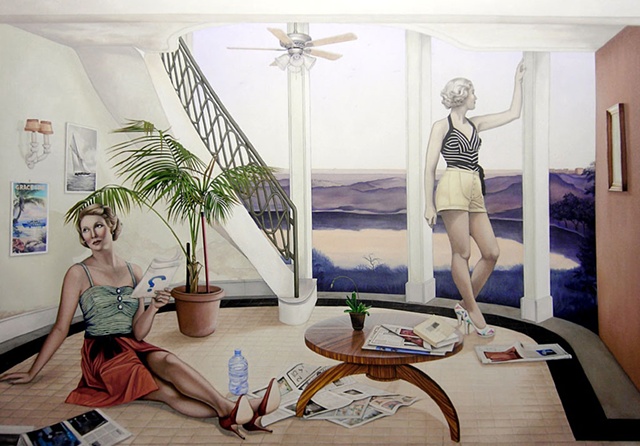 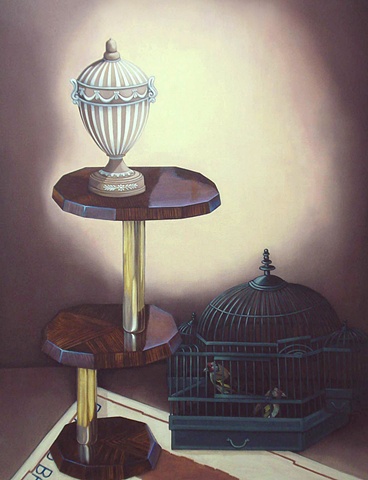 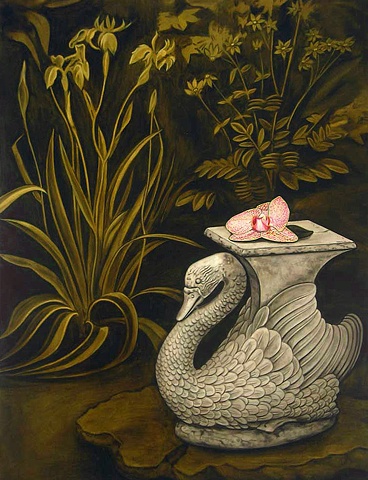 Museum 52 is pleased to present its second solo exhibition of paintings by Kay Harwood. The exhibition will explore Harwood's continuing obsession with the disquieting effects of combining miss-matched visual material.

Harwood draws together disparate fragments from historical traditions of western figurative painting along with imagery from personal photographs, art deco posters, vintage fashion culture and numerous other sources, to create a fictitious and subtly displaced space and time. The making of a collage, which forms the template for each painting is important to Harwood's working process. The new works presented depict objects and persons within obscure or abstracted locations.

French Interior, 2007, presents a room occupied by two women. The room is perspectively incorrect, yet a woman stands towards the rear of the painting leaning against a pillar, looking out onto a landscape. This vista, possibly somewhere in the Middle East, is painted in a style reminiscent of the American Sublime. To the left of the painting another woman sits on the floor glancing away from her newspaper, her pose and appearance are such that she could be in an advertisement. Towards the centre of the image is a circular table, tilted so that it seems to be on the same plane as the viewer. Harwood mixes elements that possess different purposes, the origins of which are obscured, if not lost.

In the painting Nocturne, 2007, Harwood has depicted a garden ornament in the form of a swan sitting within a backdrop reminiscent of a sketch from the late Renaissance. She describes her interest in the swan motif as

'something with a certain fallibility and pathos, despite being an elegant and 'timeless' motif. Its status as a 'dumb' garden ornament works in opposition to any notion of virtuosity suggested by the backdrop.'

It is apparent that such a combination of items only maintains its tension due to Harwood's ability to create a cohesive, desirable image. This indicates an interest in the exploration of the role of painting and beauty within visual history.

The paintings which influence the work invoke luxury, decadence and a laborious process, the necessity for which has arguably been made unnecessary by more advanced forms of picture making. Harwood states 'I am interested in the continued ability of painting to force a slow reading of things, yet at the same time offer a pleasure similar to flicking through a magazine.' Thus, initially we are allowed to experience the image on surface value, polished and seemingly resolved. However, the oddity of the compositions and subject matter encourage the viewer to rest with the image, in a futile but beguiling process of untangling the narratives hidden within the painting. The result is a feeling of visual fetishism and isolation.

Harwood received the Painter-Stainers Award and the Cheneviere Fellowship. Her first solo show with Museum 52 was in November 2005. Exhibitions include The Lexmark European Art Prize, and Salon Nouveau, Engholm Engelhorn, Vienna.